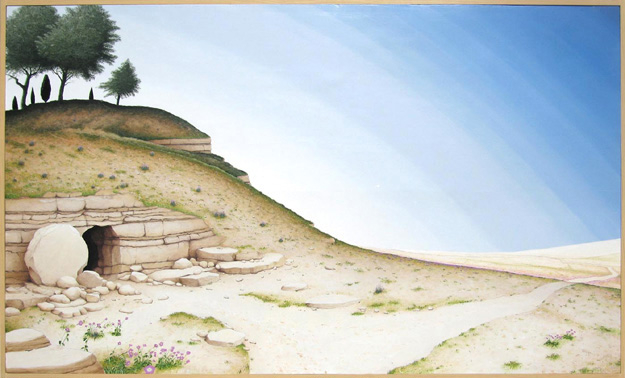 The Resurrection picture was simply drawn and painted, unpondered in advance to embed meanings. Almost from the very beginning of the unveiling of The Resurrection, words of illumination came from many who looked upon it. Fellow Resurrection Church parishioners, friends in Christ, and artists too, began to receive revelation after its completion. This writing collects up those gifts for the purpose of sharing in faith.

An antiphon from the Liturgy of the Hours during the Easter season resonates with the sky as it came to be painted:

“The vaults of heaven ring with your praise, O Lord.”

Fr. John DoBranski, who invited the making of The Resurrection, revealed that the foreground path intersects the bottom center edge and becomes the point of entry into the picture. Also, that there are no persons depicted in it. This gives the effect of reserving each pilgrim’s encounter with the empty tomb as personal, alone and by one’s faith.

Victoria Laidler proclaimed these words during Easter 2008, while commenting on the song Rise Up My Love based on the Song of Solomon:

The reason the Resurrection matters to us personally, is that it’s promised to us personally. Christ is just the first fruits, and if we are joined to him by faith, then he will raise us up. And because he has been raised, the world is already changed; the new heavens and the new earth have already begun even though we don’t see them – like in Steve’s beautiful Resurrection painting, where you can tell the sun has risen even though you don’t yet see it.

In a Foundations of Theology paper written during the Easter season of 2008, Kimberly Weiss offers these words:

The Catechism of the Catholic Church teaches that the empty tomb is the first thing we encounter in the story of Jesus’ Resurrection. As the viewer looks at the painting, we ourselves are standing on the path and looking at the empty tomb. The path we are standing on continues off to the right and makes the viewer wonder where it leads. There is, however, a narrower path that leads toward the hill, and toward the light. This path echoes the gospel of Matthew: “How narrow the gate and constricted the road that leads to life.”

The light comes from an invisible source, presumably the rising of the sun. The rising of the sun as seen on the day of the Rising of the Son. The light casts semicircles of color across the sky, depicted by Mr. Taylor in various shades of blue. The arcs resemble a rainbow, symbol of the covenant of God with Noah, as the Resurrection of Jesus is the New Covenant.

In John’s telling of the Resurrection story, Peter goes into the tomb first. Peter is the “rock”, and in the painting, the rocks are piled around the entrance of the tomb. These rocks would be the first things at Jesus’ feet as he walked away from the tomb.

Slightly right of center in this 52″ × 86″ painting is a one-inch turtledove. The dove is flying toward the light and represents the Holy Spirit. This motion is the only movement encountered in the painting, reminding us that there were no human eyewitnesses to the Resurrection of Jesus on that morning. Mr. Taylor’s work allows us to be the “first” discoverers of the empty tomb on Easter daybreak. It also takes a little bit of effort to see the dove, which is not visible at a quick glance. How often do we also miss the Holy Spirit moving in our own lives when we are not paying attention!

The Lenten rose of Palestine in the foreground, suggested for inclusion by the artists’s wife, Christine, echoes the gospel’s description of the tomb place as a garden. And there is a setting stone – a place to rest and contemplate and rejoice in wonder at this greatest of moments on earth.

The path heading off to the right, that also circles around toward the light, a suggestion offered by Susan Eberhard, is for the faithful to walk upon, the path opened by Christ to the promise of dwelling one day in the pureland of God. Christ is raised and new life is vouchsafed, yet we each still have to make the walk toward our resurrection, “what is already and not yet”. The head of the Body of Christ, Jesus himself, has completed the passage, but still remaining is the rest of the Body, all souls in Christ.

Many parishioners celebrated the tiny white turtledove that wheels around the hill toward the Light. It is the Holy Spirit that Jesus left with us, to help us and guide us safely to the destination.

For the artist, the tomb and its darkness were recognized as symbols of enslavement; and the dawning light of Easter, the joy of liberation from enslavement, freedom from sin, addiction, all things not in the sinner-addict’s power to fix or heal by himself. Jesus lifts all from the grave of sin and addiction, from the graves of demonic entanglement, obsessions, compulsions, unconscious behaviors, the grave of all non-custody of our spiritual nature and birthright.

The tomb itself is on the extreme left, like an obstacle set aside, thus the painting is dominated by light, space, openness and grandeur. This is the Life God intended: true freedom, real freedom, in Christ His son, whom He sent for the fulfillment of our peace and joy.

I will praise you, Lord my God, with all my heart
And glorify your name forever;
For your love to me has been great
You have saved me from the depths of the grave

Christ’s tomb is new, freshly hewn from the native rock and unlike all others before. The splinters and shards of excavation strewn near its mouth echo the sharp, brutal trauma of the Passion. The blackness of the tomb tells that Jesus is not there. Mark’s Easter gospel, in fact, invites us to see the place where He was laid, not just as proof that He is not there, but that darkness itself is void, empty, defeated.

Two paths appear extending from the empty tomb into the light, and a third implied between them.

The long and winding path on the right might be the path of all believers, the path of patience, humility and gentleness: living as His servant, His yoke is easy, His burden light. It is a smooth path of reward and blessing that rises mercifully. It is the path of the lay Christian.

There is also a narrow path that ascends the tomb hill, which suggests the way of total abandonment to divine will. The path winds through seven trees, the last three of which descend in retrograde before disappearing, like the saint herself becoming one with God. This seems the steep path of total giving of self, of suffering servants, and of victim souls; the Church’s clergy, consecrated and saints.

A third way seems implied, skirting the foot of the tomb hill, as though mediating hill and plain, the flat and the steep, is drawn by the subtly perceived dove of the Holy Spirit. Perhaps as a middle path, it is the way of ‘Martha plus Mary’, a blending of divine adoration and service to others: the path of true discipleship. Outwardly, vocation of service is in the world, inwardly we are as monks, not of this world, but of God’s kingdom, worshippers of God. It is the path that no one can map except oneself and God, as His plan is fulfilled in our obedience, fidelity and trust, walking with Him by shear faith.

“The Resurrection is not just a moment, but an entire revolution that has begun and a journey for each to follow to its imponderable unending end in heaven. It is the greatest journey any human can ever take, the way into holiness, the way of Christ. The Way. Amen.”

The following psalm-prayer from the four-week Psalter in the Ordinary of the Liturgy of the Hours resonates in summary with The Resurrection:

Lord Jesus, early in the morning of your resurrection,
you made your love known and brought the first light of dawn to those who dwell in darkness.
Your death has opened a path for us.
Do not enter into judgement with your servants;
let your Holy Spirit guide us together into the land of justice.