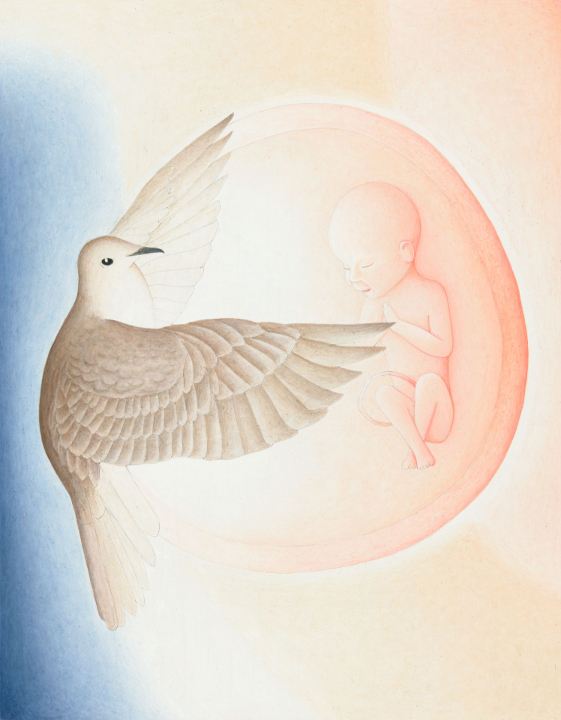 The womb was central, as a globe, with the infant ...
a white dove representing the Holy Spirit brings light and the truth:
‘I knit you in your mother’s womb.
Your life has purpose because I wanted you.
You are My child,’ said God.

... I saw the Holy Spirit caressing the baby in the womb of a standing mother.
It was all at once, a realization of love, blessing and affirmation, of the gift of individual life.

That was the great light, the words being spoken in blessing.

Everyone who lives life and has life, at one time began life.

And at its great peril, humanity forgets this indestructible, eternal truth.

The Divine Will keeps everything in order. But scientists sometimes ply positivism and thereby arrogate the right to meddle with what belongs only to God, Who already knows perfectly the order of His creation. How is respect demonstrated for the Maker’s holy purpose by biological nano-engineering if, for example, uridine and pseudo-uridine are now obliged to be interchangeable?

Our universe of gigantic and infinitesimal wonders has an Author, the Divine Will created the ineffable ultimate of Life. His small creature cannot claim authorship of life. Abortion, knowingly or unknowingly, disrespects the Designer’s design of birth, and the commandment:

Once it begins, everyone knows how complex and inexorable is the synthesizing of the child in a maternal womb. Who stops to ponder how this nine-month creation is accomplished without any visible ‘causer’? Yet proceed it does.

Whom does a tiny fetus endanger? A baby poses a threat to no one.

However, a new child does impose a serious obligation upon parents. This truth makes other human preferences come to the surface. But Life itself cannot be down-listed among mere options. If there is no Life by priority, then everything else that comes with it vanishes too, including the deepest human meanings and purposes.

The words at the heading from Cynthia Davis were received as a tender, majestic revelation on human conception.

Though not a religious movie, Stanley Kubrick’s 2001: A Space Odyssey gave art, through its concluding sequence, the image of fetal life breaking forth to a new human dawn. The universal symbol: humanity is arriving at the end of an age. Time is indeed coming and has come to an end.

Throughout its 2000-year history, the Mother Church of Christianity, the eldest brother of all Christian sects, has risen by the power of grace – the divine assistance – on the sacramental body, blood, and Word of its King, the Christ, Jesus.

Even non-Christians know that the Christ gave to earth the greatest prayer: the Our Father.

Composed of seven intentions, the epic third crowns its apex:

“Thy kingdom come, Thy will be done, on earth as it is in Heaven.”

For many, “Thy will be done” is understood simply as God’s way being superior to the creature’s fearful myopic preference. Far more mysterious is the first part, which asks “what would such a coming, look like?”

The final intention of the Our Father, “but deliver us from evil,” is also implicit in the kingdom come: deliverance of the heir from any blockage that prevents the Coming.

Author and philosopher Daniel O’Connor has called the Kingdom of God “the Christian’s mission and the World’s penultimate destiny”. An unsettling fact appears in this announcement. Whether one is religious or not, believer or non-believer, to earth shall come what is native to Heaven. Daniel is messenger, the good news is always in the Our Father.

God created the universe in seven spiritual days, a few billion terrestrial years. The last creation day introduced man into the Garden of Eden. But this son & daughter debut did not end the story. How many days will humanity go forth ‘into the week’ until it rests?

Man began long ago. We, are only the generation bearing the torch at present. If the week is far spent (see Cardinal Sarah’s book The Day is Now Far Spent), which day are we in?

The Polish Bishop and eventual Pope John Paul II made a declaration in 1976 that we live now in end-times. It sounded like ‘end-of-the-world’ times, but, clued by scripture, it accounts only for the end of an eon, of mislead human travail.

The Universal or Catholic Church, like the Temple of Israel, has many prophets whose portent should be heeded. Prophets in every generation declare what Comes before it comes.

From the beginning of the Church, the scriptures and the Christian prophets have reminded the world that the kingdom of God will come and is coming. No one knows the hour or the day, nor will say ‘here it is’ or ‘there it is’. We look around, we see groaning in every direction, in every nation. Great psychological suffering, and outright denial of same suffering at the same time! Will “normal” return? The pit is now deeper than humanity can extract itself by its own hand, because humanity has lost a spirit of objective inquiry and of reality arbitration.

During the last one hundred years, a new emergence has appeared among a small clutch of hidden souls. The fact of these persons is collectively, historically new and real. Their ken of holiness is certifiable, never observed before in history. No other religion or its adherents has seen the likes of this spiritual florescence.

The Spirit of God comes. At the same time, God is Light and Purity, and cannot dwell with atmospheres of sin, among prisoners of darkness and idols of lusts. The seventh day on earth is the era of rest. Six days of struggle are almost completed, with its many purgatives and purifications. Peace will follow and then long reign.

The Christ fetus prays, consecrating humanity to Divinity, the radical move of Heaven, always declared in the Prayer. The blood of God was sacrificed in solidarity with humans to foreclose the era of suffering in sin.

Born at this new earth, man returns by cosmic homecoming, to the Womb of his Creator. The eighth day of God is the completion, the origin reappearing.

The Christ has been given all powers in Heaven and earth; His Voice has called every year since the Baptist. If one reads the many words given to the littlest ones, one recognizes in all of them the same Voice. How can this be, in every year? How does the atheist explain the Voice that once spoke as no one ever spoke; a Voice that continues to speak in every generation? Ignorance provides no excuse in a society as information-saturated as todays.

The Voice ascended (on a Thursday) so as to dispatch the Spirit, the Memory and Illuminator of Heaven’s indestructible un-aging Word.

The Christ has spoken in a perpetual, inexhaustible sermon foretelling His Gift of humans living in His Divine Will, heretofore possessed only by the Mary, but given since to the first-born (Thérèse, Luisa, Faustina, Elizabeth ... saints possessed by God) at a price of nineteen human centuries.

Not only is every child a person, announced in Christ’s revolution of the human person, but every child is a tabernacle of God. And whereas John consecrated with water, the Word will baptize with holy fire; a fire that cleans profoundly, a spirit that breathes new life.

But God does not come and kindly possess those who do not ask Him, seek Him, know Him, honor Him, thank Him, serve Him, pray to Him, and, above all, love Him. That is the kingly free-will prayer and choice. Anyone can choose it. Choose to see the choice. Who can see it? The request of the Gift of living in the eternal Divine Will.