Icon of the Fiat 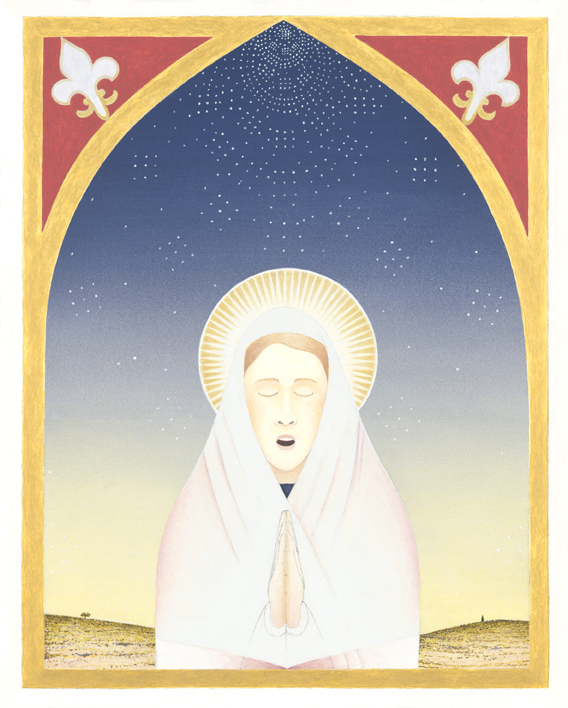 “In order that the mystery of the Most High might be fulfilled, the holy archangel Gabriel ... entered into the chamber, where most holy Mary was praying.
It was on a Thursday at six o’clock in the evening and at the approach of night.” (pg. 105)

“The gift of clearness and purity ... were sometimes noticeable in her most beautiful face ... to a certain extent her face was always more bright and lustrous than that of other creatures ... it exhibited qualities altogether above the natural order of other bodies, which produced in her a most delicate and spiritualized complexion ...” (pp.136–137)

“The Holy Virgin sings to God the hymn of human longing. ‘The Mother of your Word sings for all eternity the hymn of your praise which she began on earth.’

“The Blessed Mother wears a plain white dress and mantle, emblem of holy purity, blushed with red, here, to radiate her namesake, Rose of God.

Light, emanating as from an open book, appears below Mary’s hands in prayer: with her fiat, the incarnation of the Word appears within her. The Light is shadowed in red of the Lamb’s blood. Blood and light: the humanity and divinity of Jesus. The Virgin Mary is the doorway through which the Light came into the world.

A gothic arch, frames two hills of Nazareth. The left hill is graced by an olive tree, signifying the Jews; the right hill by a cedar, symbolizing the Gentiles. Mary is the ark, joining the Israelites and the Church; the chosen people of God and all the people of the world.

The Holy Trinity overshadows Mary in an interwoven triad of heavenly lights. “The Angelus Domini (or ‘the Angelus’) is the ringing of church bells in three groups of three chimes with a pause between each group, followed by nine consecutive strokes at 6 AM, Noon and 6 PM ...”

The fleur-de-lis are rendered in soft purple-white, edged with transparent gold: the Virgin’s fullness in grace and beauty.

“The God of gods, the Lord, has spoken and summoned the earth. From the rising of the sun to its setting, out of Zion’s perfect beauty he shines.

“Our God comes, he keeps silence no longer.”

“How consistent it is with the incredible tenderness of God, that His Christ, the Immortal Child, should be conceived by the power of the Spirit in the body of a child, that a child should bear a child, to redeem the world.”

— Caryll Houselander
The Reed of God

[At the beginning of the Mass] “The Introit is an arch, a gateway, a place where God waits to greet His soul-child.”

“ ‘As icons are windows to God, so are Latin and Gregorian Chants.’ The Annunciation is the first ‘Introit’ of the Holy Church of Jesus, humanity’s long-awaited greeting of Grace – God Himself. Jesus comes, and introduces humanity to the soul, to the Christ, to the Church, through His perfect human mother.

“Luke (1:26–38) employs the optative case (genoito, ‘may it be done’) without a subject, which is used positively only in this unique place in the New Testament.

“In Greek, the optative expresses ‘a joyous desire to’, never a resignation or a constraining submission before something burdensome and painful. Thus, Mary serves as a model to all believers of how to accept the divine will – with joyful trust and desire of its fruition.”

Afire yet unconsumed she burns,
The Virgin who brought forth a Son,
To set the universe alight –
As God commanded, it was done.

Ablaze with living Word, she shines
In silence while the dark grows dim
Before the Voice that summons stars
To sing salvation’s glorious hymn.

Aflame with God, enwrapped in cloud,
She warms the thinning dark of night
As time unwinds toward endless dawn
When shadows yield to Christ, our Light.

In burning bush, in flaming cloud,
You speak, O Triune Mystery:
With Mary, may we sing your praise,
Great Three in One and One in Three!

It is poetic to imagine that God’s first coming to minister directly to his people, in human incarnation, was transacted somehow at both the end of day’s light and at the beginning of a new day to come.

In the salvation of man, one can see dusk as the symbol of day spent, the ‘day’ of human futility and exhaustion coming to an end. Dawn is preceded by night, night that prepares the coming of day, the day of God-with-us. Mary’s yes resounds at both the end of man’s long waiting day and the new day of God in our very midst, which will change everything on earth.

Ecce ancilla domini.
Fiat mihi secundum verbum tuum.
(Behold I am the handmaid of the Lord.
Let it be done to me according to your word.)

Hodie aperuit nobis clausa porta
Quod serpens in muliere suffocavit
(Today has opened for us the door that was closed
Because the serpent, in Woman was suffocated)
Unde lucet in aurora
Flos de Virgine Maria
(Therefore shines brightly in the dawn
The flower of the Virgin Mary)