In 1895 at a Carmelite convent in Lisieux, France, Sister Thérèse Martin assembled a poetic ‘piety play’ entitled The Divine Little Beggar of Christmas. The beggar Child would appear again and again in nativity postcards and holy cards of early 20th century Europe.

True Christmas is lux ineffabilis, invisible light, appearing at midnight in the abyss of winter amidst great internal dark. The light is enfleshed, dressed in rags, attended by a retinue of angel musicians, searching, in a lamb cart. Fawn, hare, partridge, junco, and all creatures turn in the hush of knowing.

Inside each home, the young, the maturing, and the old await. Their fire burns, hearth incense rising above the cold. Drawn from Heaven: faith, parent to child.

The poor stranger comes to beg human belief, human need, human love, for Him. He begs mustard- seed faith. God, as a beggar, “stripping Himself completely in order to descend into the night of our souls, as He took the form of a slave to descend into the darkness of history”, has a gift to bequeath: unending life.

The beam of the Father’s Heart escorts the visitor. The shepherd named The Word tarries on with a staff and the light of His blood.

He comes silently to those who know with faith He is coming ...

Who will know the esteem of His soul kiss? 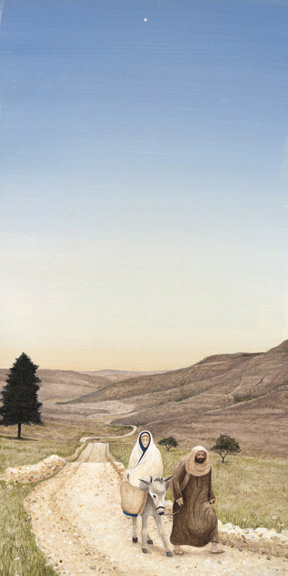 Joseph, Mary and a littlest donkey approach Bethlehem late on the day that will see the long-awaited appearance of the Savior. This painting illustrates the silent, prayerful, tested, determined faith and hope that was Mary and Joseph’s. As pilgrim sojourners with the holy parents, one can reflect how at times Christians may be called to lead others, as Joseph lead, quietly, resolutely, in actions without words. In other moments, the faithful might be called to follow, as Mary followed, with trust and obedience. Still in other moments, opportunity to humbly assist, as in the donkey bearing the blessed Mother, or receiving that assistance from another. Pope Benedict XVI called Mary Star of Hope, whom Christ depended upon completely for nine months. She is the model of pilgrim servants, filled with simple joy because filled with God. Mary bears Christ within herself and carries Him who is Love to others to whom she gives generously. She leads all by her selfless, giving example, praying continually: “Let it be done to me according to Thy word.” 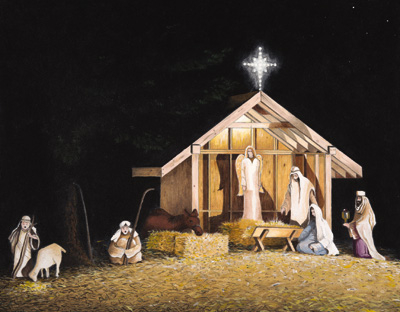 In 1223, Saint Francis of Assisi celebrated, with pontifical blessing, an unusual Midnight Mass – outdoors – because the Franciscan Chapel in Greccio was too small for the many who came. Arranging hay and manger and animals, he assembled what has been revered since as the traditional Christmas “creche” (crib scene), as well as the first “live Nativity”. The man of God stood before the re-creation abath in tears, pondering in adoration the reality of Almighty God come to His world as a tiny newborn infant. The babe in Bethlehem, the manifestation of God humbling Himself to be like, even dependent upon, his own creature, is a mystery of unending mercy that signals the beginning of the Christian revolution of love. On Christmas night the faithful everywhere pause to remember the first breathing of the purest child ever to be and to receive the blessing mystical presence of His Infant Spirit, Who is benevolence. Cold, night, and angelic light purify the faithful, (depicted here in Toledo, Ohio) and join the enacting in union with the ancient senses, in an embrace of simplicity, essence, God with us: the true desire of every human heart.